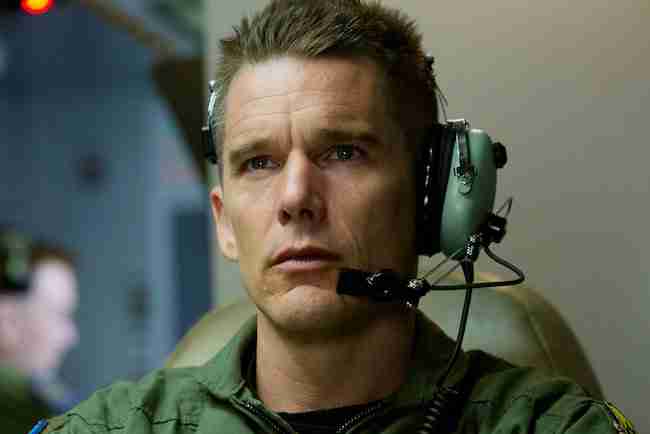 Imagine Top Gun without the schoolboy antics – and the flying. That’s what you get with Good Kill. That’s not to say that Andrew Niccol‘s 2014 drama is boring (it’s not), it’s just that 21st Century aviation has changed to such an extent that pilots no longer have to take to the skies – they can just control unmanned aircraft from the ground.

Ethan Hawke plays Thomas Egan, a former hotshot pilot now taking out Taliban troops from the safety of a Las Vegas airbase via drone strike. Eagan is bored by his routine missions and he’s eager to take to the skies once more and relive his fighter pilot glory days. His dedication is tested when he’s tasked with carrying out morally dubious missions for the CIA.

Low key but captivating, Good Kill casts an interesting eye on modern warfare. It shows how new technology has turned the theatre of war into a real-life video game. It also illustrates how easy it is to forget that real people are at the end of every strike when the mission is handled from thousands of miles away. Niccol gets to play with the morality of using this technology – much like he did with the concept of reality television in his script for The Truman Show.

Niccol’s drama is helped by an engaging performance from Ethan Hawke. Hawke really sells the role of the hard-drinking pilot who doesn’t like how his high pressured position has now turned into a desk job. The former dead poet actor has now entered an interesting phase in his career, with his boyish good looks now settling into middle-age. Bruce Greenwood is also good as Hawke’s superior, another man who has seen a change in military tactics but he’s more at ease with how this has had an affect on his role as a protector of US citizens. Less successful is January Jones, who effectively riffs on her Mad Men house wife role, without adding anything new.

Good Kill is a good drama that might not have a lot of edge-of-seat thrills but it is suspenseful. More importantly, however, it tackles the many issues facing the military today.