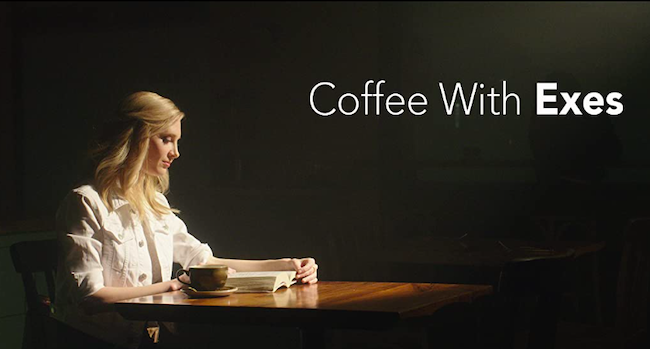 There’s a serious amount of fun to be had with the comedy short, Coffee With Exes. It stars Jessica Bishop (who also wrote the script) as a young woman navigating life, love and relationships in the 21st Century. The film follows Bishop’s Jess as she has coffee with a selection of different exes and it manages to pack a heck of a lot into its brief ten minute running time.

Coffee With Exes is directed with verve by Brett A. Hart, a director who knows how to craft a visually impressive conversation piece. Hart is the man behind 2008’s gritty, male-driven thriller, Bone Dry and Coffee With Exes marks an interesting change of pace for the director. In lesser hands the material could have been flat, but Hart gives this dialogue heavy comedy a strong aesthetic and a cinematic quality with the help of cinematographer Jonathan Michael Mahoney.

Writer and star Jessica Bishop is a charismatic actress with an impressive deadpan delivery. Her performance is on-point and her script sparkles with wit and one-liners. There’s a Sex And The City quality to the whole thing, but it never feels derivative. In fact, Coffee With Exes is rather refreshing, hitting its viewer like a shot of double espresso. The film also features a zesty score from Bonnie E. Hart which keeps the tone light, perfectly complementing her husband’s direction as well as Bishop’s script and performance.

Coffee With Exes is an entertaining and energetic comedy short which delivers humour, gags and a damn good time. What more could you want in the space of ten minutes?