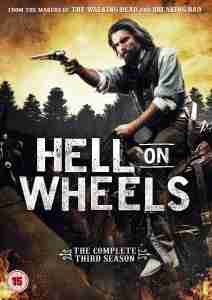 We live in a new Golden Age of television. It’s a time where narrative storytelling on the small screen is surpassing the quality of that on the big one. The focus on franchise moviemaking has seen good writing migrate to television, totally changing the belief that those involved in television are involved on a lower art form. Hell On Wheels takes the western, a genre which has had a rough-ride at cinemas lately and given it a new lease of life in your living room. It’s a well produced piece of TV that is held together by a superb lead performance by Anson Mount.

Set in the second half of the 1880s, Hell On Wheels charts the daunting task of building the US railroads. It follows the men and women living in a traveling town (the Hell On Wheels of the title) as they slowly move across the country laying down the tracks. It’s a dangerous task, not only do they face the angry natives who are furious at the loss of their land, but also themselves, as drink and hot tempers rage within the confines of their mobile civilisation.

The Western is a great American tradition and the genre has had many classics both on the big screen (Stagecoach, Unforgiven, The Searchers, Dances With Wolves) and the small screen (Rawhide, The Lone Ranger and Hatfields And McCoys). In recent years it has fallen out of favour with audiences, but Hell On Wheels shows that there is still much mileage left in the ‘oater’. Created by Joe and Tony Gayton, Hell On Wheels offers a gritty modern interpretation of the western, while it also has a streak of humour running through it that makes it feel rather quaint. This makes for great television, as it doesn’t have the hard edge that we get in many modern shows. Each episode is also relatively short (clocking in at under 45 minutes) meaning that the tales never outstay their welcome.

What makes Hell On Wheels special is the casting. Colm Meany offers pantomime villainy as the evil Doc Durant, adding a gruff John Huston/Sterling Hayden-style intonation to his raspy tones, while Common adds a dash of modernity as the emancipated slave, Elam Ferguson. However, it’s Anson Mount’s Cullen Bohannon who makes the show special. He’s a true leading man, anchoring the show with manly charisma. This man deserves to be a star.

Saddle-up, kick-up your spurs and ride into the Old West with Hell On Wheels.